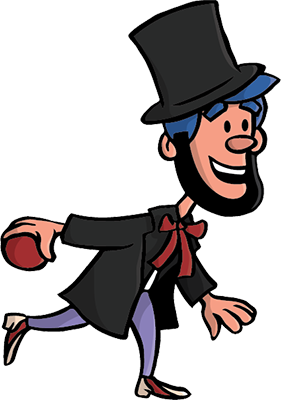 Bowling has been played in countless variations for over 5,000 years, with the earliest bowling artifacts originating in Ancient Egypt. No, they weren’t playing 5 Pin bowling, in fact it is likely the game the Ancient Egyptians played would be completely unrecognizable to us, but it is the starting point for the evolution of the game of bowling that ultimately leads to where we are today.

The genesis of 5 Pin bowling was a product of the society of its day, and the ingenuity of one eccentric man. Thomas Ryan, the inventor of 5 Pin bowling, had originally opened the first Tenpin bowling centre in Canada on the corner of Yonge & Temperance Streets in downtown Toronto, featuring 10 lanes, palm trees, and a string orchestra. A private member club, the bowling centre catered to a white-collar crowd. Many of Thomas Ryan’s customers, looking to bowl a game on their lunch break, were unsatisfied with the speed of Tenpin bowling. Not only that, the ball itself was seen as too heavy. In Thomas Ryan’s own words:

“The Tenpin ball was too heavy for the type of person I had induced to bowl. Some hadn’t used their muscles in years. They’d bowl one or two games, then play bridge in my office while I supplied adhesive tape for their thumbs.”

In response, Mr. Ryan had his father whittle down some pins, introduced a hand-sized ball, created a scoring system, and 5 Pin bowling in its original form was born. The year was 1909.

5 Pin bowling grew rapidly from the start, with the first league being formed in 1910. What followed was an explosion of the game across the country, with a staggering amount of league bowlers; it is estimated that in Toronto alone, at any given time during the 1950’s there were 120,000 league bowlers.

The following decades saw the sport evolve with the creation of various associations that govern the sport and industry, as well as the introduction of a national youth bowling program in 1963 that has served over 2.2 million registered 5 Pin bowlers since its inception.

Today, 5 Pin bowling continues to be a favourite activity of people of all ages and abilities across the country.

4. 5 Pin bowling has a Hall of Fame in Ontario: Run by the Ontario 5 Pin Bowlers’ Association, the Hall of Fame recognizes Players, Builders, and Legends of the game in Ontario. Started in 1968, induction ceremonies are currently held every 2 years.