Searching through the archives of the Youth Bowl Ontario office, one is constantly reminded of the rich history of our game. Due to the efforts of former staff members, an incredible amount of this history has been preserved, going as far back as the 1920's. Most of these items are likely one-of-a-kind, or at the very least quite rare, and as such we are pleased to share them on occasion.

In this article, we will be sharing a brief history of the YBC Senior Mixed Team Championships.

Click here for information about the 2016 Senior Mixed Team Championships

The Senior Mixed is a tournament that brings together some of the finest Senior age youth bowlers in the province. Bowlers qualify in their zone to form a mixed team, which proceeds to compete against teams from other zones in the province, for a chance to claim the provincial championship. Akin to an all-star team competition, the Senior Mixed has been home to amazing moments and incredible bowling for over 50 years; it is a true accomplishment to earn the right to call yourself a Senior Mixed provincial champion.

As alluded to above, the first Senior Mixed Team Championship took place all the way back in February of 1967 at Agincourt Bowl, Scarborough. Created by Tom Craig, a long-time YBC Zone Representative and President of the Scarborough 5 Pin Bowling Association, the tournament first began as a local Metro Toronto event, but success would soon see the event opened to all zones in the province, and eventually established as part of the official YBC program. In fact, between 1974 and 1991, even Western Quebec was represented at the event, including winning the championship in 1980.

One of the unique characteristics that set the Senior Mixed apart from other tournaments was the very concept of the mixed team itself; boys and girls bowling on the same team, which was less common at the time.

As much as it was a bowling event, the Senior Mixed was also a social event. While the bowling portion has always been held on the Sunday, from 1979 to 1994 the Senior Mixed was a weekend-long affair, with official functions taking place on the Saturday, including dinners, banquets, dances, and even such things as a sightseeing tour of the Darlington Nuclear Generating Plant in 1986!

Of course, what this tournament is about at the end of the day, is the bowling itself. The Senior Mixed has been the source of countless exceptional performances, both from an individual and team perspective. 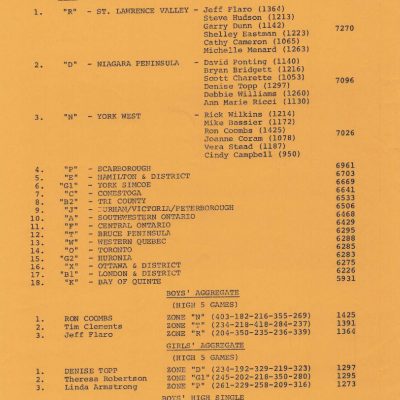 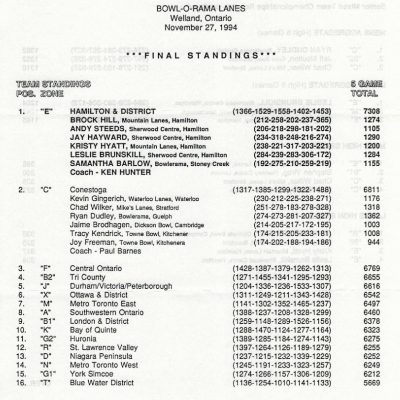 Those fortunate to be declared champions are enshrined on the "Anne Myers Memorial Award for Annual Competition". Anne Myers was an employee of the Bowling Proprietors' Association of Ontario in the 1960's and worked alongside Doug Miller, the founder of the YBC.

With such a rich history of exceptional competition, it is rewarding to see today's bowlers continuing this legacy. We encourage all Senior youth bowlers to participate in this event and add their own name to the story.

Click here for a full record of champions, high-game and high-series award winners, and host sites.

If you would like further information regarding past YBC Senior Mixed events, please contact us, and we will be happy to assist you.